As part of an ongoing species reintroduction effort, scientists at Auburn University, along with numerous state and national partners, released 26 threatened Eastern indigo snakes into Conecuh National Forest on Friday, July 14. The release is part of an on-going project, coordinated by the Auburn University Museum of Natural History’s Alabama Natural Heritage Program, to reestablish the Eastern indigo snake in its native, longleaf pine forest habitat in south Alabama.

The Eastern indigo snake is the longest native snake in North America, and may reach a size of 8.5 feet and a weight of 11 pounds for males, and 6.5 feet and 6.5 pounds for females. A non-venomous, docile snake, the Eastern indigo gets its name from its lustrous, glossy, iridescent blue-black coloring of the head and body. 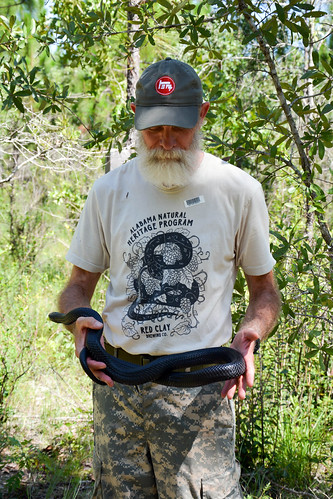 Auburn University’s James Godwin holds an Eastern indigo snake, which is the longest native snake in North America, reaching as much as 8.5 feet long and 11 pounds.

The snake disappeared from the state due to a variety of factors, including loss and degradation of their natural habitat, over collection associated with the pet trade, excessive mortality from automobiles, and gassing of their winter refuges to catch rattlesnakes.

"The morning after the first release in 2010, the first snake that was located was found eating a copperhead," said James Godwin, zoologist with the Auburn University Museum of Natural History’s Alabama Natural Heritage Program, who has coordinated the project from the start.

Since the reintroduction effort began, approximately 130 Eastern indigos have been released into Conecuh National Forest. All of the snakes have been implanted with a Passive Integrated Transponder, or PIT tag, for permanent identification.

“Can we call the reintroduction project a success thus far? Yes,” said Godwin. “Does Conecuh National Forest have an abundance of Eastern indigo snakes? Probably not. Our studies show that only about half the snakes we release will actually survive into the next year. But we do have evidence that they are breeding in the wild and quickly growing in size, and a snake was seen and photographed in the wild a couple of weeks ago.”

Early monitoring efforts were conducted by Jimmy and Sierra Stiles as part of their master’s thesis projects in biological sciences at Auburn University. The first release in 2010 involved 17 snakes that, in addition to PIT tags, were implanted with radio transmitters for tracking purposes.

“We wanted to know if these snakes that were raised in Tupperware would know what to do once they were released into the wild, and they did!” said Sierra Stiles. “They instinctively knew to use the gopher tortoise burrows for shelter, they knew how to find food, and they were mating.” 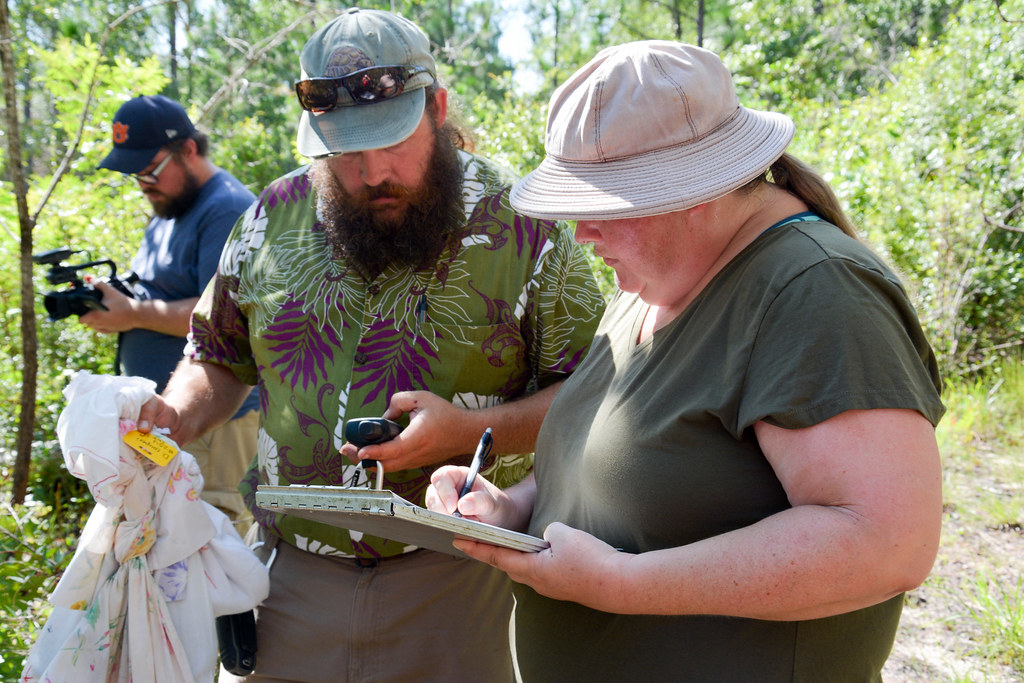 Each Eastern indigo snake release was implanted with a Passive Integrated Transponder, or PIT tag, number for permanent identification. In this photo, Jimmy and Sierra Stiles log the precise release location and PIT tag number of an Eastern indigo.

“We used radio telemetry to track the snakes for three years,” said Jimmy Stiles. “Now we conduct surveys of gopher tortoise burrows and look for evidence of Eastern indigo snakes. The holy grail would be to find a snake that doesn’t have a PIT tag, because that would mean the snake was born in the wild.”

The Eastern indigo snakes that have been released in Alabama were raised in captivity by agencies such as Zoo Atlanta and Central Florida Zoo’s Orianne Center for Indigo Conservation. Rearing and breeding large snakes like Eastern indigos can be costly, and challenges include maintaining enough adult snakes for breeding, pinpointing the most effective methods for breeding, warding off disease, and successfully incubating the eggs. Thus far, a combination of resources and expertise have allowed for success in captive rearing and breeding of Eastern indigos, and the effort continues to grow. 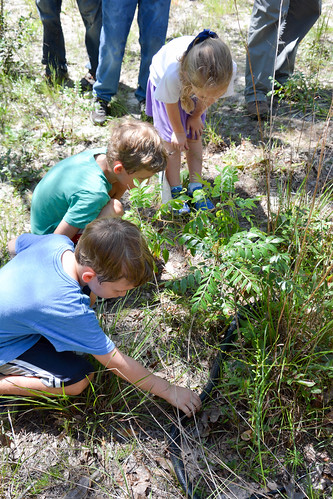 Children were included in the 2017 Eastern indigo snake release as a means of instilling an appreciation for the natural world in a future generation of leaders.

“It’s not just about the snakes and the trees. It’s about people as well,” said Mersmann. “Functioning ecosystems that were so common in the south are part of our natural heritage, and the work that we do and the reintroduction of the indigo is really part of leaving a legacy for the future."

Dozens of agencies and people of all ages were on hand for the 2017 release, including families with young children.

“I am amazed that so many people are interested in snake conservation,” said Godwin. “Instead of snake persecution, we have snake conservation! The effect the Eastern indigo snake has on people is amazing. The Eastern indigo is a gentle giant, very docile, does well with kids, and people flock to see it. From a human standpoint, the Eastern indigo snake reintroduction project has definitely been a success as evidenced by all the people and enthusiasm during our release events. The Eastern indigo is a great symbol for educating, raising awareness, and eliminating fear of snakes. It can be difficult to overcome the fear with adults, but with children, we have an opportunity to build an appreciation of the natural world so when they grow up, they will be good stewards and continue the rebuilding effort.”

The Eastern indigo reintroduction project is made possible by a Wildlife grant from the Alabama Department of Conservation and Natural Resources. Other partners in the effort include: Auburn University Museum of Natural History’s Alabama Natural Heritage Program; Central Florida Zoo’s Orianne Center for Indigo Conservation; Zoo Atlanta; U.S. Fish and Wildlife Service; and the U.S. Forest Service. 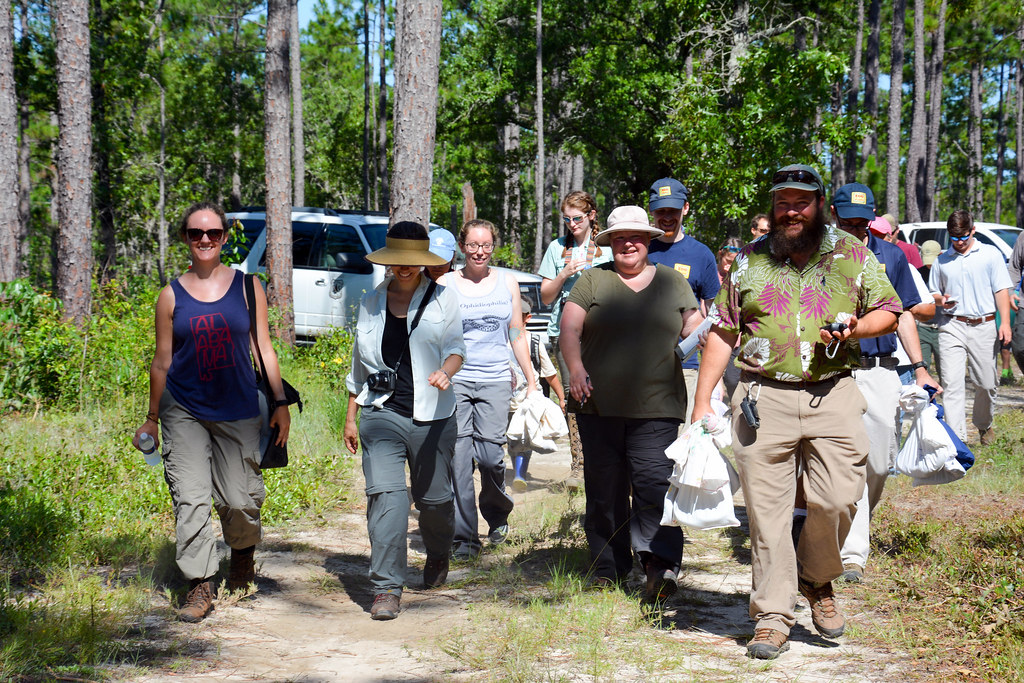 Dozens of people from various agencies were on hand to assist with the release of 26 Eastern indigo snakes in Conecuh National Forest.