A lifelong Alabamian, Cost is a three-time Auburn graduate with a Bachelor of Arts in Psychology, an M.Ed. in Special Education, and a Ph.D. in Rehabilitation and Special Education - Behavioral Disorders. Before her position at the University of Montevallo, Cost worked in the Auburn area in mental health and special education roles in the Lee County school system, East Alabama Mental Health and Lee County Youth Development Center, at Auburn University as a graduate teaching and research assistant and assistant director of the Summer Clinic program, and later as assistant professor at Stephen F. Austin State University in Texas. At the University of Montevallo, Cost was professor of Special Education and responsible for program coordination, assessment and accreditation activities in the department. During her tenure, she launched the university’s service-learning program and developed two major civic engagement initiatives, “Falcon Scholars in Action,” a community outreach program with Shelby County non-profit agencies engaging university students, and the “Montevallo Connection” initiative which promoted collaboration between the university and the city’s public schools.

Cost’s community engagement and advocacy extended beyond campus to civic leadership, in which she served for more than 16 years as an elected Montevallo city council member and Mayor. In her two terms as mayor, she was responsible for all municipal operations including budget management, direct supervision of ten department heads, infrastructure maintenance and improvements, and overall promotion of civic engagement, social equity and inclusivity for citizens. During her administration she initiated a Students’ Institute, a Junior City Council, and a comprehensive recycling program among several other citywide initiatives.

A graduate of Leadership Alabama and Leadership Shelby County, Cost has received a number of educational, municipal and civic engagement certifications from the Alabama State Department of Education, the Alabama League of Municipalities, and Auburn University’s Community and Civic Engagement Imagining America Institute. She has a comprehensive record of disciplinary research, grant acquisition, publication and presentation across her special education, civic engagement, and community development dossier. Among her many notable scholarly and public recognitions, Cost was named a Kettering Foundation Research Fellow, the Albert Schweitzer Fellowship Humanitarian of the Year, the Alabama Main Street Hero Award, Gulf-South Summit Outstanding Service-Learning Collaboration Award, and Auburn University’s Academy for Civic Professionalism Alumni Award. She has been active in community service at both the local and state level including board service with the Shelby County Chamber, Alabama Environmental Commission, Alabama League of Municipalities, Montevallo Sister City Commission and many other initiatives.

Janie Brown graduated from the University of Alabama with a B.S. in Commerce and Business Administration majoring in Marketing and obtaining concentrations in Sales Management and Market Research. Janie has been with Auburn University since 2000. Before joining Auburn as a graphic artist, she served as a manager with Creative Services at the Opelika-Auburn News for nearly 10 years. Mrs. Brown offers graphic and creative support to all of Outreach's units and projects. Janie grew up in Auburn and continues to enjoy the area with her husband and daughter.

Hill most recently served as the Chief Student Development and Retention Officer at Point University. Hill served in an oversight role for the Office of Student Life and the Department of Athletics. He also served as the Director of Student Success, oversaw all efforts to retain students, coordinated all Orientation related activities, served as the Lead Title IX Coordinator, and served as an instructor for BUS 435 Sports Law, as well as EFT 101 Effective Thinking (first-year experience course). Hill formerly served as a Senior Associate Athletics Director at Auburn University for 12 years. Hill oversaw the Auburn Football Letterman Club (AFLC), the A Club (former student-athlete organization), AUBURNYOU – which works to promote student-athlete experience initiatives (internships, programming, etc…) and create a permanent gateway for former student-athletes to remain connected to the athletics department, and he served as the sport administrator for 10 of the 21 sports sponsored at Auburn University.

Hill returned to his alma mater in 2006 after working at Stetson University as the Associate Athletic Director for Compliance for over five years. He has served on several NCAA and institutional committees, been involved with and chaired several search committees, involved with a major facility enhancement to the basketball arena, served as sport administrator for the men’s basketball program, oversaw strength and conditioning for all 21 sports, involved with all major compliance related matters and supervised student-athlete support services (academics) for all 21 sports. Hill serves on the Auburn Water Works Board (AWWB) and previously served on the Downtown West Point Development Authority Board (DWPDA).

Hill was a member of the Auburn University football team in the early 90’s and served as a high school football coach where several of his former players received scholarships to attend institutions in the Southeastern Conference. Hill is married to Sherina Hill from Bremen, Georgia and they reside in Auburn with their two small children, Kylie (11) and Christian (10). 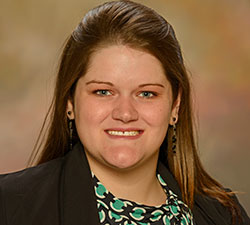 Katey Nelson graduated from Auburn University in May 2011 with a B.F.A. in Graphic Design. Originally from Mobile, Alabama, Katey came to Auburn seeking higher education and has since gained so much more. She currently provides information technology support to all departments within University Outreach in the areas of web design and maintenance, computer hardware and software solutions, and publication/poster design for Outreach sponsored events and conferences.

Joyce Thomas-Vinson earned a Bachelor's degree in English from the University of Alabama. She came to Auburn University in 1994 as a Program Developer with the Outreach Program Office. She transferred to the Auburn University Department of Psychology where she served for ten years as the support services coordinator for Project Uplift. Joyce joined the staff of the Office of Public Service in July of 2008. In addition to serving as the Coordinator for the AuburnServes network, she is the advisor for Campus Kitchens at Auburn and Circle K International.

Ralph Foster is AVP Emeritus, having retired in 2020 after more than 31 years in the Outreach division. He continues to contribute to a number of special projects for University Outreach. A third generation alumnus, he has a BS in business administration from Auburn. Foster also received an MS in human resources from Troy University, and has additional study in adult and continuing education at the University of Georgia National Leadership Institute in Adult and Continuing Education. Foster’s professional and civic engagement includes board and committee positions in several state, regional, and national academic and community organizations. He has received a number of awards and recognitions for his civic and professional engagement over the years, including the title of Fellow in the Society for Advancement of Management, the highest professional designation of that international organization. His publications include journal articles and book chapters on ethics, education, management, marketing, and civic engagement.