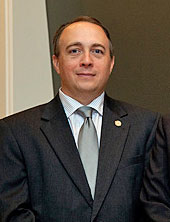 Mr. Mason is the Director of Serve Alabama: The Governor’s Office of Faith-Based and Volunteer Service. He has been in this position since January 2011 after being appointed by the Honorable Governor Robert Bentley. The Serve Alabama provides education and outreach to faith-based and community organizations, promotes volunteerism and service, manages the AmeriCorps State program, and works to build citizen preparedness for disasters through the Alabama Citizen Corps Council program and the Ready Alabama campaign.

His professional experience includes 18 years as a Meteorologist in Tuscaloosa and Birmingham. Additionally, for 8 years he was the owner of an advertising company in the private sector. Mr. Mason grew up in Demopolis, AL. He received a Bachelor’s Degree in Political Science from the University of Alabama and a Certificate in Meteorology from Mississippi State. Mr. Mason resides in Tuscaloosa, AL with his wife and three children.

Ms. White is a native of Montgomery, Alabama where she attended Jefferson Davis Sr. High School and Troy University-Montgomery majoring in Accounting. Ms. White Her served 9 years with the State of Alabama in titles ranging from Administrative Assistant II to Account Clerk where she has assisted in the areas of personnel, billing and pesticide certification. Currently, Ms. White is the AmeriCorps Program Assistant at Serve Alabama. Ms. White has worked with Serve Alabama since May of 2011 and has served as the AmeriCorps Program Assistant since January 2012. As the Program Assistant, Ms. White supports and provides resources to nine Alabama AmeriCorps State Programs within the state of Alabama. In addition she assists with monitoring and compliance to ensure programs align with the Corporation for National Community Service requirements.


Serve Alabama, The Governor’s Office of Faith-Based and Volunteer Service
Learn about the role of Serve Alabama as the “unofficial office of volunteerism” for the state. Speakers will discuss National Service, including AmeriCorps, Vista, NCCC, Senior Corps and the new FEMA Corps national service program available for anyone 18 – 85 interested in a deeper volunteer experience. AmeriCorps members serve in local schools, statewide programs and for national programs such as Habitat for Humanity and Teach For America.