Auburn Faculty, Staff, and Alumni Meet the President of Malawi in Montgomery

At least 15 Auburn faculty, staff and alumni were invited to meet Dr. Joyce Banda, President of Malawi, at a reception hosted by 100X Development Foundation held on September 20, 2013 in Montgomery.

Joyce Banda became President of Malawi in April 2012 and is only the second female president in Africa. Formerly she was the country’s Vice-President, the Minister of Women & Children’s Affairs, and a member of the Malawi Parliament. She is a passionate advocate of women and children’s rights, founding a charity that assists children and orphans through education. President Banda was ranked as the Most Powerful Woman in Africa in August 2012 and #47 among the Most Powerful Women in the World in 2013 by Forbes Magazine. 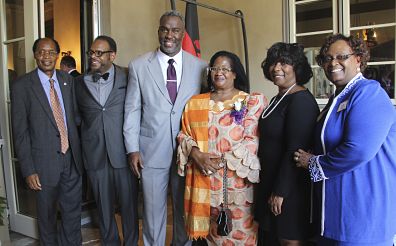 The 100X Development Foundation is a non-profit charity that has been focused on the needs of children, medical care, education, and agriculture around the world. There has been a special focus in the country of Malawi since 2004 when 100X began the construction of an orphanage in the small southeastern African country. 100X has also been working with Auburn University College of Education and School of Nursing to take student and faculty study abroad teams to Malawi.